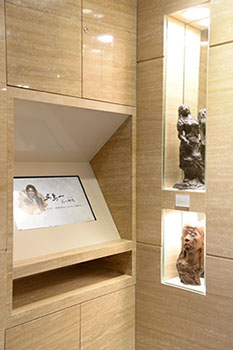 The kiosk in the studio presenting Professor Wu's artistic achievements.

The world-famous master sculptor Professor Wu Weishan, President of the China Academy of Sculpture, established this sculpture studio at Macao Polytechnic University (formerly Macao Polytechnic Institute, MPI) as early as 2001, an important milestone on the artistic journey he has since travelled with MPU. In 2014 Professor Wu created a Confucius statue for MPU as a gift. While erecting the statue, MPU has taken this opportunity to relocate the studio to the lobby of Meng Tak Building to better present Professor Wu's artistic achievements and his contribution to Macao’s art education.

The studio exhibits works Professor Wu has created during his presence at MPU in various teaching activities after Macao's handover, as well as pieces he has donated to the University. Amongst the exhibits included are ‘Mother and Son’ which celebrates the tie between Macao and its motherland, the prototypes of several award-winning pieces shown in international art exhibitions, as well as some rarely seen works of painted porcelain. In the studio an interactive kiosk is in place to present the artistic achievements and works of this master sculptor. 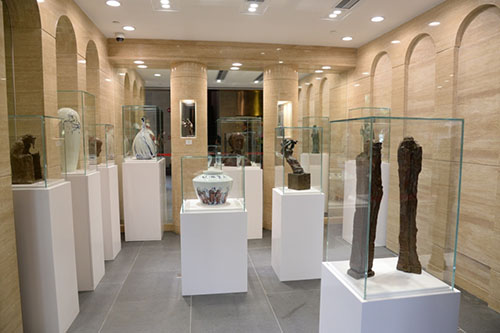 A number of Professor Wu's works are displayed in the studio.