MPI students competing in the city center of Macao

To strengthen students’ communication skills, enhance their team spirit and train them to be brave to bear challenges, MPI has organized the first large-scale outdoor event in the new semester– Macao Running Man.

Led by the Running Man tutor, MPI students in various groups competed in the city center of Macao and finished the multiple missions that they were given. After the event, the tutor reflected and discussed the results of the event with the students and they stated that they had learned a lot.

The event was run in English in order to meet the need of the international students. In the competition, students had to go to certain spots in the Central District of Macao to perform the tasks, such as being a salesperson, singing a song in public and also doing exercise, taking photos, hugging, dancing with strangers or even asking them something in the street. Performing the tasks is not just a challenge to the stamina, students have to overcome the psychological barriers with the strangers, breaking their existing perceptional shell and rediscovering themselves beyond the comfort zone. A Portuguese year 1 student Mariana who is studying International Chinese Language Education stated that facing a lot of strangers made her feel embarrassed at the beginning, but with the support and encouragement by the teammates, she gradually got used to the environment and finished the missions well. A year 3 student Leong who is studying E-Commerce discussed that since he is more familiar with Macao city, he was able to guide the other two international students within the team and those two international students interacted with the citizens well and with passion. By accomplishing the missions together, students have overcome the communication gap, gained true and precious friendship and understood the value of team spirit.

The main organizer of the event, the Student Affairs Office stated that MPI has been continuously organizing different types of student events in order to let them have as much development as possible from many aspects and also arouse their potentials. MPI also helps them to set up healthy perceptional values and hopes that future graduates will maintain the spirit of practicality and ambition and contribute to the development of Macao society. 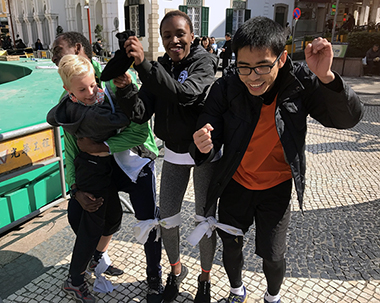 MPI students accomplishing the missions with the strangers 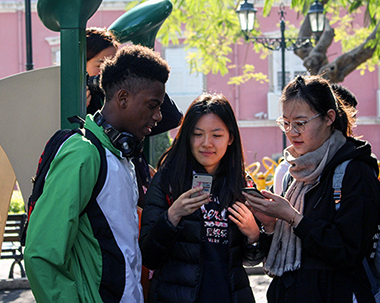 MPI students accomplishing the interactive tasks with the strangers